On July 25, SeaWorld San Antonio announced the birth of a beluga whale, using the word “excited” to describe park staff’s reaction—as if dooming another newborn to a lifetime of abuse and cramped enclosures is something joyous. But PETA and compassionate people everywhere know the truth: The birth of beluga babies into a life of confinement, condemned to swim in endless circles inside a barren tank, is not a cause for celebration.

Because SeaWorld thinks that baby beluga whales sell tickets, it turned Luna the beluga into a breeding machine. Workers violated her, forcibly impregnating her to create a living prop for the park’s shows. She rejected her first baby. Now this one, her fourth, is doomed to a life of suffering and commercial exploitation. Keep reading to learn more about Luna’s misery as well as how you can join PETA in taking action for her and other victims of SeaWorld.

It’s the reminder no one needed: SeaWorld is beyond out of touch. The abusement park company took to social media on January 11 to flex its speciesist muscles, posting a sonogram depicting the unborn baby of Luna, a beluga whale who has been confined at SeaWorld San Antonio for more than two decades. The publicity stunt is seemingly a vain attempt to attract new visitors to its park in Texas (where Luna resides in a cramped tank), making it clear that SeaWorld has forgotten (or perhaps just doesn’t care) that no one wants to buy tickets to a place that dooms newborns to a lifetime of exploitation.

#SeaWorld’s viral sonogram of a pregnant beluga whale is a sad reminder that its animal abuse spans generations.

If her baby survives, they will likely never know life outside a concrete prison.@SeaWorld must stop breeding beluga whales now! https://t.co/gmqSKEaJJ4

Such cringe-worthy abuse is not new to Luna. In order for her to conceive her first calf, workers sexually abused her by forcibly impregnating her with the sperm of Nanuq. Despite rejecting her calf, Alta (who was one of the first belugas conceived through artificial insemination), Luna gave birth to two more babies—and now she’s been impregnated again, possibly by forced insemination.

Torn away from his family and Canadian home waters when he was just 6 years old, Nanuq was held captive and then made to participate in an intensive, experimental artificial insemination program at SeaWorld: He was shipped around Canada and the U.S. repeatedly and removed from the water roughly 42 times so that workers could collect his sperm. He fathered 13 babies (including one with Luna), but six died at birth or shortly thereafter. Nanuq died in 2015 while being treated by SeaWorld staff for an infection from a jaw injury that he had sustained while interacting with another animal.

SeaWorld Needs to Empty Its Tanks

When not ripped from their natural habitats or born into captivity at places like SeaWorld, beluga whales enjoy exploring thousands of miles of ocean every year. They are social animals who communicate with each other using a language of clicks, whistles, and clangs. SeaWorld robs victims like Luna and Nanuq of the opportunity to do any of this, and now Luna’s baby, not even born yet, is doomed, too—unless SeaWorld acts, now and fast.

Luna is forced to participate in a show at SeaWorld San Antonio.

We and countless others have been urging it to empty its tanks for years. Most recently, after the company ended its wretched orca-breeding program and its demeaning “dolphin surfing” shows (only after succumbing to successful PETA campaigns), we’ve increased our calls for the company to stop breeding other dolphins and whales.

SeaWorld failed Nanuq and so many others, but we hope it will now do the right thing and transfer Luna and her baby to a seaside sanctuary to live as close to a normal life as they can.

SeaWorld should take a page from SEA LIFE Trust and Whale and Dolphin Conservation’s book—in August, the pair proved to the world that seaside sanctuaries are a sure thing when Little Grey and Little White (two female beluga whales) were moved from a marine park in China and released into a seaside sanctuary in Klettsvik Bay in Iceland.

Click below to join us in urging SeaWorld to get on board with seaside sanctuaries, lest it sink along with other animal-exploiting businesses that have refused to get with the times.

Take Action for Luna and All Other SeaWorld Victims 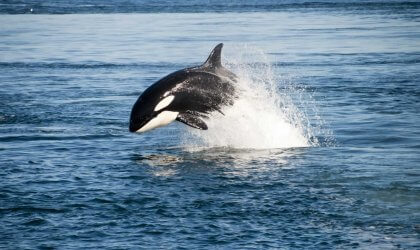 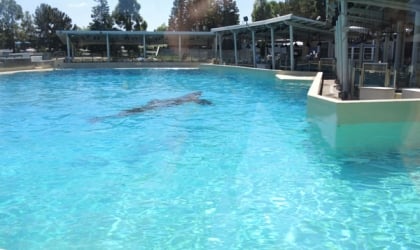