Cold water isn’t a typical concern for most penguins. But for Wonder Twin, an Adélie penguin who is losing her feathers, the chilly water inside the glass box that she’s in at SeaWorld Orlando in Florida is another stressor, in addition to living as a prisoner in the company’s Antarctica exhibit.

SeaWorld created a wetsuit for Wonder Twin to mimic her lost feathers, although it’s unclear why she started losing them in the first place. Penguins are complex, social animals with different personalities and traits. Did SeaWorld rip her away from her family and home like it’s done to other penguins? Is living inside a dirty, unnatural environment killing her just like numerous other captive animals at SeaWorld?

Penguins don’t want to live in cramped tanks that make a mockery of their natural environments. At the same exhibit that Wonder Twin is forced to suffer in, a penguin was caught on video attempting a brave escape, only to be tossed back into the tank.

SeaWorld doesn’t care about the penguins or any other animals at its abusement parks. Will the other animals imprisoned there get protective suits next? The orcas who have rake marks across their bodies don’t have suits, and there are no sunglasses for sea lions who are going blind from excessive UV exposure.

Creating a penguin wetsuit to score “cute” points does nothing to end the suffering at SeaWorld. Never patronize SeaWorld, and urge your friends and family not to, either. Make sure everyone knows how it treats penguins. 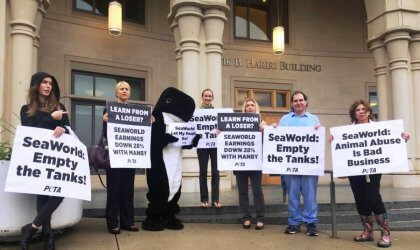