UPDATE: SeaWorld’s attempts to block PETA from proposing our shareholder resolution that calls for orcas be released to seaside sanctuaries have reached a laughable new low.

SeaWorld’s lawyers are complaining to the U.S. Securities and Exchange Commission that the term “seaside sanctuaries” is misleading because PETA has also called them “coastal sanctuaries” and “ocean sanctuaries.” But as they (and all third-graders) know, the terms are clearly synonyms. The company itself used several different terms to refer to seaside sanctuaries at its last annual meeting, in response to a question that Gillian Anderson submitted on PETA’s behalf.

SeaWorld is also claiming that the continued captivity of orcas can be excluded from a shareholder vote because it isn’t a “significant social policy issue”—even though it’s the subject of state and federal legislation and the reason the company is hemorrhaging money.

We’ve sent the U.S. Securities and Exchange Commission a polite rebuttal to these eye roll–worthy claims.

PETA withdrew its last shareholder resolution when the company did what it called for and banned orca breeding.

The following was originally published on February 16, 2017:

Rather than investing in improving the lives of the 22 long-suffering orcas who are held in small concrete cells in its parks, SeaWorld is seeking to exclude a PETA shareholder resolution from its proxy materials and annual meeting. In response to being asked to do the right thing by shareholders, SeaWorld has sent the U.S. Securities and Exchange Commission a 34-page objection to our proposed shareholder resolution, which calls on the company to retire all captive orcas to seaside sanctuaries and replace captive-orca exhibits with virtual and augmented reality. In its objection, the park’s lawyers write that the company doesn’t understand what a “seaside sanctuary” is, even though it knows full well that the National Aquarium already plans to build one for dolphins.

In addition, SeaWorld’s lawyers argue that keeping orcas in a seaside sanctuary would violate provisions of a federal law that actually apply only to orcas in the wild—not those held in a protected area who continue to receive care from humans—and that changing its “amusement park” plans would mean shareholders were meddling in its business practices, despite the fact that shareholders are rightfully permitted to address significant social policy issues through such proposals. It didn’t take us 34 pages to respond with the obvious: SeaWorld’s shareholders shouldn’t be denied the right to submit proposals that call on the embattled company to treat the animals it imprisons humanely.

We’ll never stop campaigning for these animals in every way that we can.

In nature, orcas share intricate social relationships, work cooperatively to find food, and traverse up to 100 miles of ocean every day. But as our shareholder resolution notes, those in SeaWorld’s tanks float listlessly, break their teeth by gnawing on steel gates and concrete walls, and lash out at trainers and other orcas imprisoned with them in the same tiny enclosures. Thirty-eight orcas have died prematurely on the company’s watch.

PETA often buys minimal amounts of stock in companies that support animal abuse, including SeaWorld. In this way, as partial owners of a publicly traded company, we’re entitled to take proposals that’ll drive positive change for animals to a vote as part of a company’s annual meeting process. While some companies listen and make changes to appease the majority of the public, who oppose exploiting animals for entertainment, other companies—like SeaWorld—insist on sticking with a sinking business model.

PETA was among the first to purchase stock in SeaWorld when it first became publicly available in 2013 so that we could challenge the corporation’s cruel practices. Since then, we’ve asked a question at every annual meeting and withdrew a 2016 resolution—which called on SeaWorld to ban captive-orca breeding—after the company was forced to change its policy to do exactly that.

Join us in speaking up for orcas today! 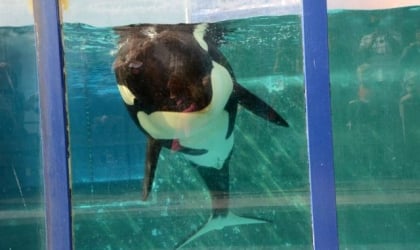 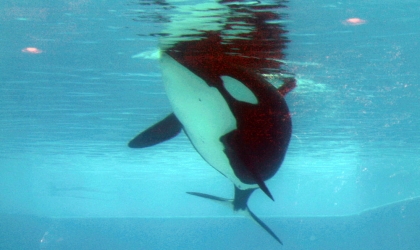