SeaWorld Protester Pleads ‘Not Guilty by Reason of Necessity’

She was arrested after blocking SeaWorld’s float at the Rose Parade, but Amanda Slyter pleaded “not guilty” in court today. Why? Because she believes that her actions qualify for protection under a common-law defense called “necessity,” or the “greater good” defense. This means that a person violated a lesser law in order to right a greater wrong—in this case, SeaWorld’s cruel confinement of orcas to tiny concrete tanks.

Amanda (in red) during her arrest

Outside the courthouse, PETA supporters gathered to back Amanda and to hold signs that read, “SeaWorld Hurts Orcas.”

SeaWorld’s float depicted orcas leaping freely in the sea with their pods—a far cry from reality. The orcas held by SeaWorld are actually confined to glorified bathtubs, where they’re forced to perform confusing tricks for paying customers. Distraught mother orcas even have their babies taken away and shipped to other parks. Standing in a parade route for a few minutes certainly seems to pale in comparison with SeaWorld’s actions.

The court has yet to decide whether Amanda’s necessity defense will render her not guilty,  but PETA will keep our members updated on the case. In the meantime, please keep e-mailing SeaWorld and demanding that the park let the orcas retire to ocean sanctuaries. 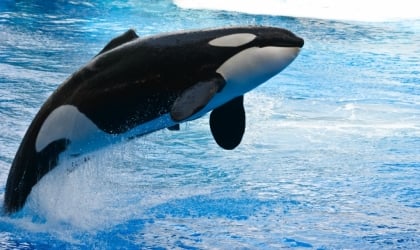 Another Captive Orca Impregnated Too Young