Dr. Heather Rally, a veterinarian who has experience working with marine mammals, visited SeaWorld San Diego in September and October 2014. Her observations reveal that orcas aren’t the only ones who suffer at SeaWorld—dolphins, walruses, and pilot and beluga whales do, too. Here are her (not so) shocking findings:

1. Dolphins with skin conditions and likely depressed immune systems interacted with the public.

A study published in the Canadian Journal of Comparative Medicine found that “[s]tress, environmental conditions and general health appear to play a major role in the clinical manifestation of dolphin pox.” Despite the stressful conditions of confinement, dolphins are still expected to perform and interact with the public.

“The dolphins involved in human interaction activities had obvious skin lesions,” says Dr. Rally. These pox-like lesions could be seen on many of the dolphins at SeaWorld San Diego.

Visitors were still allowed in the water and often sat unsupervised by the side of the pool, putting their hands in the water and touching the dolphins. The only SeaWorld staff member in the area was sitting with her back toward the guests.

2. Bullying and aggressive fights among members of various species were apparently commonplace.

When whales and dolphins are held in captivity, the stress of being confined to tiny tanks results in aggression.

The most common injuries are rake marks that form when the teeth of dominant whales and dolphins scrape the skin of the less aggressive animals. These attacks can result in painful and serious injuries. “I observed dolphins ramming, chasing, and flipping, and attempting to slap each other with their flukes,” says Dr. Rally.

Rake marks result in scarring that usually disappears within six months of the initial injury. This “means that aggression between cetaceans at SeaWorld is not only commonplace, it is also happening currently.” says Dr. Rally. The severity of the scars usually indicates which animals are more frequently bullied.

Aggression between cetaceans in the wild happens less frequently than in captivity. According to Dr. Rally, “When dolphins and orcas are held in captivity, aggressive dominance hierarchies are a common occurrence.” At SeaWorld, the animals cannot simply separate themselves to diffuse a situation, and when an aggressive attack breaks out, there is nowhere for the animals to escape to.

At least one orca who reportedly tried to flee ended up with a gruesome and painful injury.

© Ingrid N. Visser, Ph.D.
Nakai was injured on a sharp metal edge in his tank at SeaWorld San Diego in September 2012 while reportedly fleeing from an aggressive altercation with two other orcas.

Orcas in the wild create strong family bonds and swim up to 100 miles a day. At SeaWorld, they’re forced to perform unnatural tricks and swim in endless circles. Captive orcas at SeaWorld would need to swim 1,208 laps (around the perimeter of the tank) or 3,105 lengths (back and forth at the longest part of the tank) in its largest tank to equal the approximate 100 miles that they might swim in a single day in their ocean home. The stress of confinement was apparent at SeaWorld San Diego.

After observing the orca show, Dr. Rally noted that one of the orcas, Ikaika, “swam to the center of the pool and proceeded to lie motionless at the surface, occasionally lifting the head and opening the mouth as if swallowing air.” She added, “This behavior lasted at least 15 minutes as the public was cleared out of the stadium.”

Wild orcas are almost constantly in motion and spend up to 95 percent of their time under water. At a young age, Ikaika was separated from his family and shipped to MarineLand in Ontario, Canada, on a breeding loan for many years. While still at SeaWorld, he was given drugs to “mellow” him and suffered from various physical ailments, including broken teeth and chronic infections.

No trainers were present to interact with Ikaika in the barren tank, and he showed no interest in the guests as they were leaving the stadium.

Another orca, who had a severely collapsed dorsal fin, was floating motionless in the corner near the exit of the pool.

Notes Dr. Rally, “Floating listlessly in a lateral position is extremely abnormal behavior for an orca and is a manifestation of the psychological distress and boredom of captivity.”

When Dr. Rally asked an “educational” guide why this orca’s fin was collapsed, the guide responded that “the bent fin is a genetic trait similar to people with curly vs. straight hair.”

This statement is entirely false. “There is no scientific basis for the statement that orcas are genetically programmed to have collapsed dorsal fins. However, there is evidence to suggest that the conditions of captivity are responsible for the high incidence of dorsal fin collapse in this population, including activities such as spending abnormally long periods of time at the surface in direct sunlight and constantly swimming in tight circles,” says Dr. Rally.

Captive animals are deprived of everything that is natural and important to them and often experience captivity-related health problems as a result.

A walrus named Obie was confined to a tiny tank that was covered with a thin layer of green algae.

Obie suffered from psychological distress and boredom and displayed this by pressing his mouth against the glass and repeatedly regurgitating and swallowing his food. This is a common neurotic behavior in captive wild animals, and it could cause serious health problems.

Obie suffers from blindness and most likely has experienced chronic irritation of the mucous membranes of his eyes. He held both eyelids closed 90 percent of the time.

5. Separated From Their Mothers

Dolphins, belugas, and other whales are highly social animals who live alongside their families for many years, if not their entire lives. At SeaWorld, they are often forced to breed and are torn away from their families at a young age. This affects their physical, social, and psychological development and well-being.

Two juvenile female belugas were separated from the three adult animals seen on display. It is unclear whether these two are being housed together or in isolation.

Marine animals aren’t ours to use for entertainment, and they aren’t meant to be confined to cramped, barren, chemical-filled tanks. They are meant to live in their natural environments and swim freely with their families.

Based on Dr. Rally’s observations and expert opinion, PETA has filed a complaint with the U.S. Department of Agriculture regarding numerous apparent violations of the federal Animal Welfare Act. PETA urged the agency to inspect SeaWorld and hold the company accountable for any violations found. 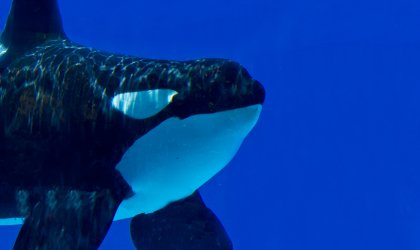