As SeaWorld’s stock value and daily attendance tanks, it’s no wonder that its San Antonio park is scrambling to change its image.

SeaWorld San Antonio President Carl Lum recently announced that after years of protests and a public outcry, the park is ending its orca shows and focusing on a “Shamu-free future.” Lum noted in an interview with Texas Public Radio that instead of theatrical orca shows, the marine park wants to invest in new roller coasters and “more educational programs.”

That’s great and all, but SeaWorld’s future is far from cruelty-free. Orcas are slated to be forced to perform demeaning tricks until 2019. And even after the company ends these shows, the animals will still be forced to jump and splash for dead fish inside the very same concrete tanks as part of “educational encounters.”

We already know about some of the trivial changes that SeaWorld has in store. The company recently asked the California Coastal Commission to approve a cosmetic backdrop that’s supposed to look like the Pacific Northwest Coast—the rightful home of many orcas—at its San Diego park. It would be part of the new “orca experience” and feature fake rocks, fake trees, and a fake waterfall. The proposed display makes a mockery of the freedom that orcas at SeaWorld never get to experience. This window dressing may fool visitors, but it won’t fool the animals, who will continue to suffer all the same.

In addition, it seems that the San Antonio park’s plans for a less cruel future address minimal changes to orcas only and fail to help other species. Though SeaWorld has announced that it will no longer breed orcas, other animals are still subject to forced breeding and artificial insemination.

This year, the San Antonio park added a “swim with dolphins” program that forces dolphins into contact with humans. Many illnesses can be passed from the animals to human visitors, including viral, fungal, and bacterial infections such as salmonellosis. This isn’t the cruelty-free future we had in mind, SeaWorld.

Imprisoned marine animals don’t care about new roller coasters or whatever the abusement park defines as “educational programs.” Confining them to tanks that are, to them, the size of a bathtub only teaches the dangerous, harmful message that animals are ours to exploit. Anything less than releasing them into a seaside sanctuary continues the longstanding practice of SeaWorld cruelty.

To remind people of that tragic legacy, PETA recently set up a graveyard with nearly 40 tombstones—one each for Splash, Kalina, Sumar, and every other orca whose life SeaWorld has stolen—outside the San Antonio park as a reminder of the victims of this year-round horror show.

Create a Better Future for Orcas

Orcas are intelligent, social animals who travel in pods with their families and swim up to 100 miles a day in the ocean. At SeaWorld, instead of socializing and swimming where they want, they can’t do anything but float or swim listlessly in circles.

Urge SeaWorld to send orcas to seaside sanctuaries and stop all abuse of captive animals! 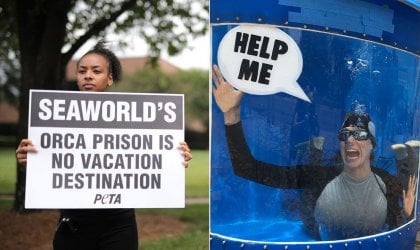 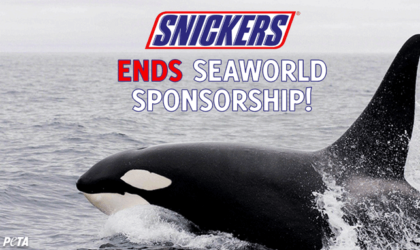