One Year After Tilikum’s Death, PETA Urges SeaWorld to Ban Breeding and Send Animals to Sanctuaries

Update: In 2017 alone, seven marine mammals, including Tilikum, died at SeaWorld. One year after his death, PETA is continuing its work to stop animal suffering at the park. As SeaWorld’s value and reputation continue to decline—as evidenced by a steady drop in attendance and revenue, a class-action lawsuit by investors, a consumer-protection lawsuit by visitors, a criminal fraud investigation, and nearly 1,000 layoffs since the release of Blackfish—PETA, which owns stock in the company, submitted a shareholder resolution last month calling on it to ban all breeding. PETA also continue to urge the company to move the surviving orcas to seaside sanctuaries.

The following was originally published on September 20, 2017:

After 33 years in captivity and following decades of exploitation in the marine-mammal abusement industry, Tilikum has finally found freedom in death.

Across the country, animal advocates gathered at vigils outside SeaWorld parks to mourn and remember his life. Millions of people became aware of Tilikum’s story through the movie Blackfish, the damning documentary about SeaWorld’s cruel practice of tearing wild orcas away from their families and then breeding them in captivity.

Tilikum may be dead, but 22 orcas remain imprisoned at Sea World. Never forget Tilikum’s story, and use his life as momentum to end these injustices.

During his life, Tilikum, the largest orca in captivity, weighed 12,500 pounds and measured over 22 feet in length.

Tilikum was captured near Iceland in November of 1983, over 30 years ago. At only 2 years old, when he was approximately 13 feet long, he was torn away from his family and ocean home.

Steve Huxter | The Voice of the Orcas

This image shows Tilikum covered with lanolin, an oil extracted from sheep’s wool. It is applied to orcas’ whole bodies to prepare them for a long transport without water.

After his capture, he was kept in a cement holding tank for close to a year at Hafnarfjörður Marine Zoo, near Reykjavík, Iceland, as he awaited transfer to a marine park. Held captive against his will, all he could do was swim in small circles and float aimlessly at the surface of the water, far away from the expansive ocean in which he had swum a hundred miles a day alongside his family members.

The picture above is of Lolita, who was captured in the Puget Sound, Washington, 13 years earlier than Tilikum. Orca capture techniques using purse-seine nets, high-speed boats, and even underwater explosives and aircraft were perfected in Washington shortly before orca-capture operations became regulated in the United States and were outlawed in Washington state. No longer able to capture orcas from Washington waters, the orca hunters moved to the open waters near Iceland, where Tilikum was captured.

Finally, he was transferred to the rundown Sealand of the Pacific in British Columbia, Canada, and forced to call his barren 100-foot-by-50-foot pool—just 35 feet deep—his sad new “home.”

Food was withheld from him as a training technique, and he regularly endured painful attacks by two dominant female orcas, Haida and Nootka. He was forced to perform every hour on the hour, eight times a day, seven days a week. The constant stress and exhaustion gave him stomach ulcers.

When the park closed its doors at the end of each day, the three incompatible orcas were crammed into a tiny round metal-sided module for more than 14 hours until the park reopened the next morning.

Steve Huxter | The Voice of the Orcas

When Tilikum did not perform a trick correctly, food was withheld from both him and his tankmates, which caused a great deal of tension, and as a result, Haida and Nootka would bite Tilikum and rake the entire length of his body with their teeth.

On February 21, 1991, Sealand trainer Keltie Byrne fell into the pool containing all three orcas. She was pulled to the bottom of the enclosure by Tilikum, tossed around among the three orcas, and ultimately drowned. It took Sealand employees two hours to recover her body from the orcas. She was the first of three people to have been killed because of Tilikum’s stress, frustration, and confinement.

Shortly after the death of Keltie, Sealand closed its doors for good and put Tilikum up for sale as though he were nothing more than a commodity.

When SeaWorld heard that a 12,000-lb. bull, the largest orca in captivity, was on the market, it quickly purchased him for its breeding program apparently giving little thought to his reputation for killing and aggression. Tilikum’s sperm was used to build up a collection of orcas, and now, 54 percent of SeaWorld’s orcas have his genes.

Tilikum had a collapsed dorsal fin, a sign of an unhealthy and stressed orca. Many orcas in captivity (but few in the wild) have collapsed fins.

Over the course of 21 years at SeaWorld, where he was confined to a tank containing 0.0001 percent of the quantity of water that he would traverse in a single day in nature, Tilikum had been involved in multiple incidents of aggression. The stress of captivity drove Tilikum to exhibit abnormal repetitive behavior, including chewing on metal gates and the concrete sides of his tank—so much so that the most of his teeth were completely worn down.

Morgan was wild-caught, just as Tilikum was. She is held captive at Loro Parque in Spain and also exhibits stress-induced behavior, including gnawing on concrete. See a photo of Tilikum here with his teeth worn down to the nubs.

The stress of captivity also caused Tilikum to exhibit aggression toward humans, which cost two more lives—those of Daniel P. Dukes in 1999 and Dawn Brancheau in 2010. Tilikum scalped and dismembered Dawn, breaking bones throughout her body before drowning her.

Following Dawn’s tragic death, Tilikum was kept in a tiny enclosure that limited his ability to swim, communicate with other orcas, and interact with humans even further. He was reported to have been floating listlessly in the water for hours at a time, a behavior never seen in wild orcas.

In this aerial view of SeaWorld, you can see how little room the orcas have. Inside the circle is Tilikum, whose nose and tail appear to be able to touch both sides of the tank at the same time.

After a year in isolation, Tilikum was returned to performing. SeaWorld unsuccessfully appealed its citation for violating a federal workplace safety law meant to protect workers from recognized life-threatening hazards, asking that the government allow humans to swim with orcas despite the risk.

Tilikum is not the only orca who became aggressive as a result of all the stress that the whales are forced to endure in the small tanks at SeaWorld. The park’s own records contain 600 pages of incident reports documenting dangerous and unanticipated orca behavior with trainers, consisting of more than 100 incidents in which killer whales bit, rammed, lunged at, pulled, pinned, and swam aggressively with SeaWorld trainers, many of which led to human injuries, including a near-death encounter experienced by trainer Ken Peters.

Aggression toward humans and among orcas is nearly non-existent in nature, but the constant stress of living in incompatible social groupings inside minuscule tanks at SeaWorld causes them to lash out, posing a danger both to other whales and to employees alike.

Show Tilikum, a victim of SeaWorld’s greed, some love by sharing his story. 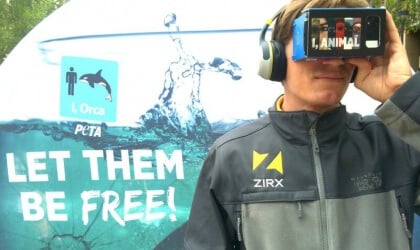