Munchkin, a leading retailer of children’s clothes and toys, says its mission is to “rid the world of all things mundane.” The company certainly stuck to its philosophy when it offered to donate $1 million toward the construction of a coastal sanctuary for captive orcas.

This Man Pledged $1 Million to Build Sea Sanctuaries for Orcas

Founder & CEO of Munchkin has pledged $1 million to help save the whales by building sea sanctuaries for orcas imprisoned at #SeaWorld ❤️To learn more, visit The Whale Sanctuary Project.

Posted by PETA (People for the Ethical Treatment of Animals) on Thursday, March 30, 2017

There’s nothing more mundane than captivity for orcas, who can swim up to 100 miles every day in the wild but float listlessly or swim in endless circles when kept in small barren concrete tanks.

Not only has Munchkin offered up this generous donation, it’s also letting the public know that orcas aren’t toys in a bold way. The company is pulling the orca toy from a top-selling bath collection, as it feels “a bathtub just isn’t big enough for an orca.” You don’t need to look any further than Munchkin’s Facebook page to see how the compassionate company feels about keeping these animals in tanks:

We are taking a stance against Orca captivity. We’re removing the Orca from our SeaSquirt Bath Toy Collection and today…

On the heels of Munchkin’s inspiring offer, PETA is offering to match the funds—if SeaWorld agrees to retire to the new facility all the orcas it holds captive. A coastal sanctuary would allow suffering orcas to swim in open water and engage in other natural behavior with limited interaction with humans.

Munchkin’s stance against orca imprisonment shows once again how public opinion is turning against companies like SeaWorld. PETA is calling on the embattled theme park to do the right thing for the animals in its care by throwing its resources into the construction of a seaside sanctuary, where, at long last, they can experience some semblance of a natural life.

Continue to stay away and make sure everyone you know stays away, too, and ask SeaWorld to retire the orcas to ocean sanctuaries.

You’d Rather Do WHAT Than Visit SeaWorld?! 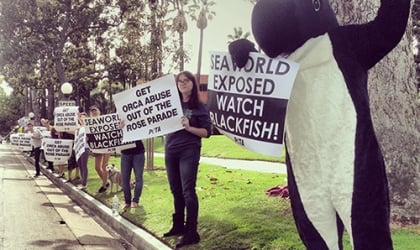