A recent visit to SeaWorld San Antonio by veterinarian Dr. Heather Rally exposed the health problems with confining animals and then denying them everything that is natural and important to them.

Many of the animals confined at SeaWorld—including beluga whales, orcas, bottlenose dolphins, and sea lions—die before their time in chlorine-filled tanks.

The recent death of a baby beluga whale at SeaWorld San Antonio may have hit the media, but one fact that SeaWorld doesn’t want you to know is that since 1993, more than a dozen other beluga whales have died prematurely at this Texas location alone.

Six orcas are housed at SeaWorld San Antonio. Why were only five of them observed during shows?

As observed by Dr. Rally, every single captive adult male orca has a collapsed dorsal fin, a condition that rarely occurs in wild orcas and is believed to result from a combination of limited space and extended time spent at the surface. In the wild, it may be a sign of an unhealthy, stressed orca.

Kyuquot is the largest orca at San Antonio and has a completely collapsed dorsal fin.

At the show, Dr. Rally notes that SeaWorld misrepresented orca expert Dr. Ingrid Visser’s 1998 study on wild orcas in New Zealand to support a misleading claim that collapsed dorsal fins are common in both wild and captive orcas. However, as Visser and her paper made clear, only one orca out of 30 males had a complete dorsal fin collapse like Kyuquot’s. In another population in Norway, only one of 174 adult males had a dorsal fin that was collapsed or bent in any way.

This wasn’t the first time that SeaWorld has twisted Visser’s findings. Back in May 2014, it used her own research to respond inaccurately to her question regarding Blackfish in its #AskSeaWorld campaign.

@OrcaIngrid Hi Ingrid, you may want to read this for information about why you shouldn’t believe Blackfish: http://t.co/KC0B5yO78a

@HlpCoveDolphins @SeaWorld thing is, U don’t have to be a scientist to know that @SeaWorld has distorted facts for years = #brainwashed — Ingrid Visser (@OrcaIngrid) April 15, 2015

Dr. Rally identified rake marks on several of the orcas at SeaWorld San Antonio. Rake marks are the most common form of injury, and they occur when the teeth of dominant orcas scrape the skin of less aggressive animals. In the wild, orcas maintain tight-knit social groups consisting of compatible orcas, and if necessary, orcas can swim away to avoid aggressive attacks by more dominant animals—but in captivity, there’s no way for orcas to escape. This can result in painful, serious injuries and chronic stress, which were seen in several of the orcas performing at SeaWorld.

Dr. Rally observed many orcas at SeaWorld with worn or broken teeth—mostly from biting on the gates and sides of the cramped tanks that surround them.

Dr. Rally notes that in order to prevent death by infection, captive facilities often drill holes into the pulp cavities of broken or worn teeth in order to open them enough to be flushed and cleaned daily for the rest of the animal’s life. This has historically been done without sedation and is very likely painful to the animals. This type of dental trauma and wearing of the teeth is highly uncommon in orcas living naturally in the wild.

At SeaWorld, many calves have been torn away from their mothers, which can cause significant social and psychological problems for the rest of their lives. Orcas in the wild live in pods, which are bonded groups of up to 30 orcas—including mothers and their offspring—who may travel together for their entire lives.

Dr. Rally observed this orca, believed to be Takara, performing tricks for entertainment with her calf Sakari. They haven’t been separated yet, but they could be. Takara has had two calves separated from her before—including Trua, who was observed in isolation at SeaWorld Orlando—and was separated from her own mother after 12 years.

“Seals and sea lions are housed in a small open-air enclosure without any shade. They spend a significant amount of their time begging for food from members of the public who are encouraged to purchase fish to feed to them.”

At SeaWorld, there’s little shade above or below the surface of the water where animals can retreat from the scorching sun. Lack of shade can cause myriad health problems, including sunburn, stress, and ocular damage.

Dr. Rally writes, “The enclosure is constructed such that the perimeter wall where food is being presented is high and directly above the water where the animals swim. This means that the animals are forced to look directly up into the sunlight in order to beg and/or catch food.”

One scientific study determined that a lack of ultraviolet-protected shade is a risk factor for ocular disease in sea lions. The lack of shade in this enclosure, coupled with the fact that animals are forced to look directly into the sunlight when begging for fish, puts animals at a higher risk for ocular damage and disease, which are common in captive seals and sea lions.

Based on the observations and expert opinion of veterinarian Dr. Heather Rally, PETA has filed a complaint with the U.S. Department of Agriculture regarding numerous apparent violations of the federal Animal Welfare Act. PETA urged the agency to inspect SeaWorld Antonio and hold the company accountable for any violations.

Spread the word that animals are not ours to use for “entertainment”: 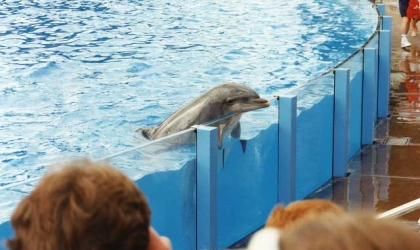