The orcas at SeaWorld get a lot of attention, but it’s important to remember that there are other animals–such as pinnipeds–being held captive in marine parks around the country, and many of them are suffering, too.

What Is a Pinniped?

Pinnipeds constitute the extant (those presently living, i.e., the opposite of extinct) species of fin-footed mammals: “True” seals (seals without visible ears), sea lions (with visible ears), and walruses are all pinnipeds. Various pinnipeds are currently held captive in marine parks, where some beg for food from tourists, others have little escape from the blazing sun, and all are susceptible to medical problems, ranging from eye damage to infectious diseases.

A Life of Misery

The depressing conditions in which marine parks force pinnipeds to live are enough to make anyone’s heart sick. Let’s look more closely at what some pinnipeds in captivity endure.

A walrus named Obie spent his days confined to a tiny tank that was covered with a thin layer of green algae at SeaWorld San Diego.

Obie suffered from psychological distress and boredom, which he displayed by pressing his mouth against the glass and repeatedly regurgitating and swallowing his food. This is a common neurotic behavior among captive wild animals, and it can cause serious health problems.

Obie also suffered from blindness and most likely experienced chronic irritation of the mucous membranes of his eyes. He frequently held both eyelids closed.

In June 2015, after 18 years of living in a tank, Obie died. He passed away 10 years shy of his natural life expectancy.

The Seals and Sea Lions at SeaWorld San Antonio

At SeaWorld, there’s little shade above or below the surface of the water to allow animals to retreat from the scorching sun. Lack of shade can cause myriad health problems, including sunburn, stress, and eye damage.

A veterinarian visiting the park noted:

The enclosure is constructed such that the perimeter wall where food is being presented is high and directly above the water where the animals swim. This means that the animals are forced to look directly up into the sunlight in order to beg and/or catch food.

One scientific study determined that a lack of shade to protect animals from ultraviolet radiation is a risk factor for eye disease in sea lions. The lack of shade in this enclosure, coupled with the fact that animals are forced to look directly into the sunlight when begging for fish, puts animals at a higher risk for eye damage and disease, which are common in captive seals and sea lions.

The Animals at Marineland Canada

Watch as one former trainer describes the day-to-day suffering of pinnipeds at a marine park near Niagara Falls. It’s enough to make anyone’s stomach turn.

Give Marine Parks Your “Seal of Disapproval.”

For walruses, sea lions, and seals held in captivity, life is dull and miserable, and it can damage both their physical and mental health. Pinnipeds—and all animals—deserve better.

Share this post with your friends, family, and followers today. Ask them never to support the cruelty of marine parks. 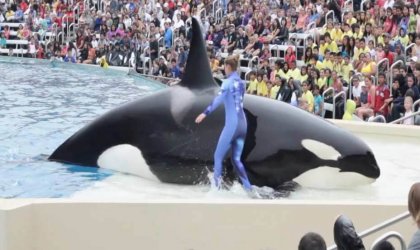