Dolphin With Dolphin Pox Still Forced to Perform at SeaWorld

An anonymous whistleblower who regularly goes to SeaWorld parks to gather video evidence of abuse has posted new photographs of a dolphin at SeaWorld Orlando’s Dolphin Cove who appears to be suffering from an infection of dolphin pox. Even though the lesions were clearly visible to anyone who came in contact with the animal, SeaWorld was still forcing the dolphin to perform.

Watching the dolphins at SeaWorld Texas | Colleen Pence | CC by 2.0

SeaWorld Orlando isn’t responding to the media, but if the park does issue a statement, it will likely say that wild dolphins can contract dolphin pox as well. However, a study published in the Canadian Journal of Veterinary Research found that “[s]tress, environmental conditions and general health appear to play a major role in the clinical manifestation of dolphin pox.”

It would be tough for the park to argue that confining dolphins to cramped tanks filled with chemicals, forcing them to perform confusing tricks for a “reward” of dead fish, and depriving them of their families, their social lives, and freedom of movement don’t seriously damage their mental and physical health.

This is just one more reason to let them go free. 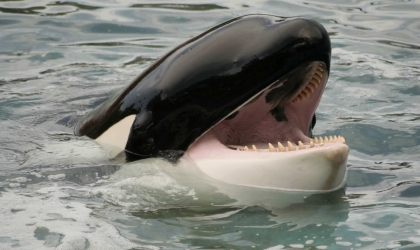