Leave it to Mötley Crüe to bash SeaWorld on its home turf. The bad boys of rock proved what good-hearted guys they are when they had fans at a show in Chula Vista, near SeaWorld’s San Diego abusement park, participate in a “SeaWorld Kills” scavenger hunt to win backstage passes.

PETA hid one of our “SeaWorld Kills” T-shirts on the concert grounds, and Tommy Lee tweeted the hunt to fans. Fans followed PETA on Twitter to get clues about the shirt’s location.

The lucky winner, Ivan, found the shirt and happily snapped his own anti-SeaWorld ad with it before heading backstage.

Tommy Lee has been drumming up disgust for SeaWorld since before the documentary Blackfish exposed its rampant abuse of intelligent marine mammals. In 2012, he wrote a scathing public letter to the park, forbidding it from blasting any of his music at sound-sensitive orcas during its loud “Shamu Rocks” shows. Tommy can also be found on Twitter sharing his feelings about SeaWorld, usually in four letters. 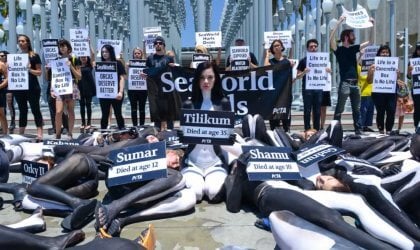 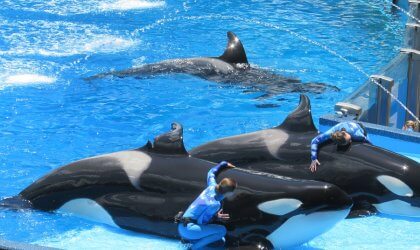